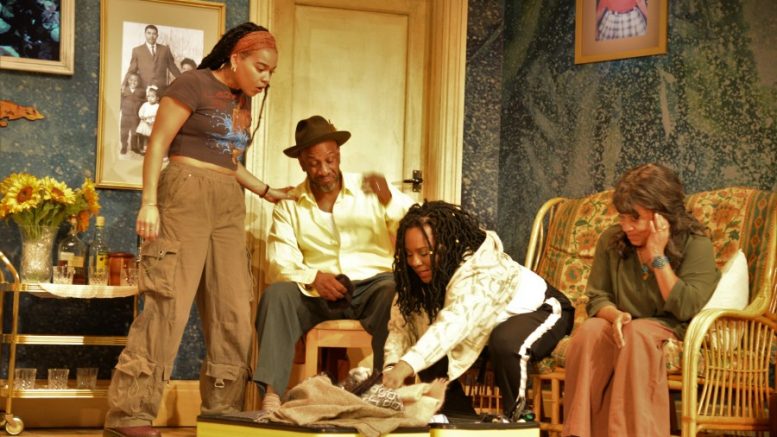 
‘Nine Night’ is the debut play by award-winning writer and actor Natasha Gordon. It enjoyed a spectacular sold-out run at the National in April 2018 before being transferred to Trafalgar Studios. This made Natasha the first Black British female playwright to be produced in the West End.

For this achievement and in recognition of the play’s overwhelming success Natasha won the Charles Wintour Award for most promising playwright at the 2019 Evening Standard Theatre Awards and in 2020 was honoured with an MBE for her services to drama.

When a member of the family becomes gravely sick and then dies, the celebrations being in earnest with the traditional Jamaican Nine Night Wake. But for her family, spending nine days together is a challenge as well as a celebration, as we see them share stories and food whilst entertaining an endless parade of mourners.

For 105 minutes, director Amanda Huxtable seamlessly transports you into the home of Gloria, where we are initially immersed in the grief of her family. Moments of comedy highlight both the bond and the frustrations that run through their relationships. What stands out most is their sense of tradition and ritual: it’s fascinating to observe the practices of how another culture reacts to death. It’s also interesting to see how these traditions pass down through generations, altered but still revered. This play resonated deeply with me, having seen my own father die from cancer five years ago. Being from a large Catholic family, I see as many similarities to the Nine Night family as there are differences with how we handled the grief.

No matter your own culture, it’s easy to recognise the characters that many families share – the attention seeker, the workaholic, the people pleaser. The latter is seen in the role of Lorraine, the mother-hen, whose devotion to her late mother was so beautiful portrayed by Shereener Browne. Her need to keep busy and ensure the wake is successful is clearly her own way of managing the grief, and when the burden becomes too much and exhaustion takes over, Browne handles this traumatic transition beautifully and most importantly, believably. In contrast, her brother Robert, played by Daniel Poyser, provides a completely contrasting take on the grieving process, with his lack of interest and focus on money, creating a character that is easy to dislike.

My personal favourite character in the play was the granddaughter, Anita, performed with energy and style by Jessica Whitehurst. Her down to earth nature and sense of rebellion made the stage vibrate with vitality whenever she was there. She also provided the next generational link in the creation of a cultural fusion, being brought up in England but passionate to learn more about her Jamaican heritage.

The comedic relief came in the roles of the older members of the family, Maggie, Vince and Trudy, performed by Josephine Melville, Wayne Rollins and Andrea Davy. Their comedic timing, lack of propriety and passion for rituals created a contrast with the deep sense of grief in the house. Wayne Rollins as Vince also showed his more caring nature wonderfully, his loyalty and love for Gloria being highlighted by good deeds that until now have gone unknown.

At times I found the longer comedy speeches in the first half hard to follow, in part because of the different characters they were referring to, but also owing to my lack of experience with some of the references they made. This was more down to my ignorance than their flaw and it didn’t take away from the overall enjoyment of the play or the ease of following the story overall.

A special mention must be given to Zara Tomkinson, who stepped in to play the role of Sophie, Robert’s wife. She clearly hadn’t much warning and she carried a script with her on stage for the most part. However, her acting was superb despite this, shown by the fact that my friend didn’t even realise she had a script. I can’t imagine how nervous she must have been, playing a role she hadn’t rehearsed fully, yet the professionalism with which both she and the cast accommodated for this was excellent. Her role was a vital one, highlighting an outsider’s view of a different culture, and how her own differences had been embraced as she was welcomed with love into Gloria’s family.

This fly-on-the-wall view into a distinct culture was both fascinating and moving, and a must-see for anyone. The passion the characters felt for their sense of identity and family cohesion is one we can all take inspiration from, even if they are by no means the perfect family.

I think the most important message to take away is that there are more things that unite us than part us. There are so many parts of this family that I could identify with: the easy way of communicating with people who have unconditional love for you, the family stories and jokes, the frustrations and annoyances that build up but are often kept hidden. As much as this play is about culture, it is also about family. It is about realising what you have whilst it’s still there and being thankful for those who are there to share it with you.

Tickets can be booked here.

All photography by Sharron Wallace.

Next-Up : Do you really want to retire?

Students reminded everybody needs good neighbours ahead of summer changeover

On the 27 October, Marshalls Mill will open its doors to the public for a free Halloween ghost hunting tour of Holbeck’s…

The City of Leeds has been honoured with a special reminder of the Queen’s legacy. The rowan sapling stood outside Buckingham Palace as part of the Tree of Trees sculpture to celebrate the Platinum Jubilee this year. It has now found a place in the peaceful gardens of the Sue Ryder Hospice in Headingley. The […] Leeds Living …

Leeds Creative Skills Festival, an exciting new festival of events, is set to showcase the array of opportunities available in the creative and cultural sector across the city. Leeds City Council News – News …

‘The Löwecal’ is a premium session lager that packs an ABV% punch – but without the carbs. The lager was created by a Leeds-based team who believes in the power of balance and didn’t want a good time to come at the cost of good health. I spoke to co-founder Adam Cuthbertson about The Löwecal […] Leeds Living …