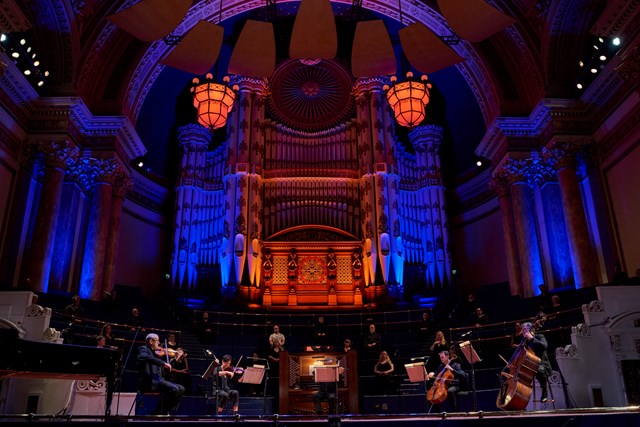 Despite two lockdowns and stringent restrictions between and since, Leeds Town Hall has enabled professional musicians, school children and audiences to rehearse, perform and enjoy live music throughout the pandemic, all within the COVID-safe environment of its magnificent and naturally airy surroundings. It is the only major venue in the UK to have been able to do so to such an extent.

The Orchestra of Opera North returned to Leeds Town Hall in early July for socially distanced rehearsals. It was an emotional reunion for players who had not performed together since the UK lockdown in March cut short the company’s tour. They blew away the cobwebs with Brahms’ Second Symphony and the Leeds United anthem Marching On Together, in celebration of the team’s promotion to the Premier League.

On August 28th Leeds International Concert Season (LICS) presented the Orchestra of Opera North’s concert of chamber and small orchestral works, which was one of the first live music events to take place in the UK following the lifting of the first lockdown. This was followed by recitals by internationally acclaimed artists including the pianist Kathryn Stott, cellist Steven Isserlis, Manchester Collective, Brass and Percussion of the Royal Philharmonic Orchestra, Manchester Camerata, a live and livestreamed Leeds Lieder Festival. In addition to this, LICS presented free lunchtime concerts on Mondays, Wednesdays and Fridays through to the beginning of the current Tier 3 restrictions.

The Town Hall’s superb acoustic and suitability for recordings enabled Opera North to record the soundtrack of a newly commissioned animation of Act III of Puccini’s La bohème, and for a major new commission from South African-born cellist and composer Abel Selaocoe. As You Are: A Soundwalk for Leeds features the Orchestra and Chorus of Opera North, which opened in central Leeds on Saturday 12 December. On the same day, Leeds Town Hall provided the setting for Opera North’s concert staging of Fidelio, conducted by Mark Wigglesworth which is available until Saturday 19 December via the Company’s new ONDemand platform.

“Throughout this extremely difficult and challenging period for the city’s arts and culture sector, it has been absolutely fantastic to see such a wealth of musical activity continuing to take place at Leeds Town Hall. It cannot be underestimated how valuable these live events and rehearsal facilities have been in supporting the welfare of some of the most vulnerable members of our community and our professional and aspiring young musicians.

I am extremely proud and thankful to our Arts Events & Venues Service team at Leeds Town Hall for making our city’s best loved building safe and secure for so many people in our community to benefit from during this time.”

“For Opera North’s ensembles and Leeds Town Hall alike, months of enforced silence this year have been extremely difficult. But both organisations have responded to developments as they unfolded with imagination and determination, and our concert at the venue in late August was one of the very first to take place nationally as the country emerged from the first lockdown.

“Since then, the Town Hall has been Opera North’s base for rehearsing, performing, recording and streaming much of the output that we have programmed in response to the pandemic. We were delighted to return to the building to close our year with a livestream of our much-anticipated Fidelio. The latest in our innovative and acclaimed concert stagings at the venue, it was also a wonderful opportunity to celebrate all that we have achieved together against such adversity this year, and to look forward to a brighter New Year.”

With a new year on the horizon Leeds Town Hall looks forward to welcoming audiences back in 2021 to enjoy comedy from Omid Djalili, Milton Jones and Sandy Toksvig, speakers including Tim Peake and Katie Piper, family shows including Zog, and some of the world’s finest orchestras and internationally acclaimed artists in Leeds International Concert Series.

“After so many months without performing, let alone seeing an audience, stepping into Leeds Town Hall was truly overwhelming. Being able to share music in a live setting was simply blissful and an experience I will never forget.”

“The joy we experienced at Leeds Lieder, in putting on recitals at the magnificent Town Hall, cannot be overestimated. To hear music live, to communicate and connect with our community of listeners both on-line and in person, to support freelance musicians and recording teams, to offer learning platforms for young artists and to champion the art form we love in a city we call home, all of this came as a real a tonic in such a difficult year. We are so fortunate to have such a generous bank of friends and philanthropists who support us, including Arts Council England, and we are proud to count Leeds Town Hall and their superb team amongst our collaborators. We are already looking forward to enriching more lives with our recitals in spring 2021.”

“The 17 October was Manchester Camerata’s third public performance of 2020. It’s been an incredibly difficult year for everyone but not least our freelance musicians, many of whom have been unable to perform or earn income since March. I’d personally like to say a huge thank you to the team in Leeds for their passion and determination to support live music and particularly freelance musicians.”

Leeds Town Hall, one of the UK’s most magnificent examples of Classical-Baroque style Victorian architecture and arguably the city’s most iconic building, was built by Cuthbert Brodrick between 1853 and 1858. In September 1858 it was officially opened by Queen Victoria and the great hall was dedicated to her and renamed Victoria Hall. Inside stands the impressive 3-manual organ built by Gray and Davidson, the largest of its kind in Europe. Today it is home to Leeds International Concert Series, which welcomes the world’s greatest orchestras and international artists, an outstanding programme of light entertainment and a range of conference facilities. It is also one of the city’s top wedding venues.

The Orchestra of Opera North

The Orchestra of Opera North holds a unique place amongst British orchestras as the only ensemble in the country to have a year-round dual role in the opera house and concert hall. The Orchestra plays a significant part in the major concert series of the region, appearing with numerous international guest conductors and soloists. Important relationships with Leeds International Concert Season and Leeds Town Hall see the Orchestra performing regular concerts of major symphonic repertoire, gala concerts, and collaborating with the region’s choral societies. It is also the resident orchestra for the Leeds Conductors Competition and plays regularly in Leeds University’s International Concert Season.

Since the turn of the century, Opera North has worked with Kirklees Council in a ground-breaking partnership to curate the Kirklees Concert Season based in Huddersfield and Dewsbury Town Halls. As a result, new relationships have been formed with groups across the Kirklees area, including performing ensembles and educational institutions. In collaboration with Opera North Education, the Orchestra has a strong commitment to educational and community projects, increasing accessibility and encouraging new audiences and the musicians of tomorrow.

The Orchestra also recorded a complete cycle of Beethoven Piano Concertos with Howard Shelley as soloist/ director for Chandos. Most recently its recording of Elgar’s Caractacus with Huddersfield Choral Society and Martyn Brabbins for Hyperion found widespread acclaim. The Orchestra received universal acclaim for the Company’s signature concert staging of six cycles of Wagner’s complete Ring in 2016, which it followed with equally successful performances of Turandot (2017), Salome (2018) and, last summer, a new concert staging of Verdi’s Egyptian epic Aida. 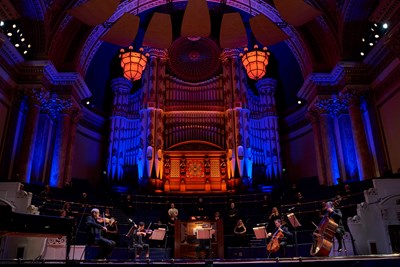