An agreement to buy Huddersfield’s George Hotel  – the birthplace in 1895 of Rugby League – looks set to be signed off tomorrow (June 16).

The process has been speeded up to tie-in with a key meeting over the future National Museum for Rugby League, a version of which formerly had a base in the building.

Papers to be put before Kirklees Council’s decision-making Cabinet tomorrow (June 16) reveal that the authority will pay “an enhanced premium” for the Grade II*-listed building, which was built in the 1850s.

Members of the Cabinet are not expected to stand in the way of the deal. The purchase is expected to be completed by the end of July.

A decision on the future of the hotel was expected at the end of June.

However it was brought forward to strengthen the council’s bid to host the rugby league museum at the birthplace of the sport.

A four-year long project to launch the museum at Bradford City Hall was scrapped in April when the charity behind the project – Rugby League Cares – announced it was re-opening the application process for organisations to establish a museum.

The report to Cabinet reveals: “Kirklees and one other bidder remain in the process, with the final decision to be made following a presentation to Rugby League Cares on June 18.

“The control of the building is key to the success of the bid, hence why we are looking to take an urgent item to Cabinet on June 16, in order that we can confirm we have made the decision to purchase the building before the final panel meeting on June 18.”

The council outlined three options over the George:

Doing nothing was “not an appropriate option”.

As well as being risky compulsory purchase could have taken two years with no guarantee of a positive outcome, plus the owner could claim monies that are above the open market value of the property.

Such a time-scale would also mean the council loses the chance to secure the National Museum for Rugby League at the George Hotel.

In contrast to CPO purchase by agreement “can be achieved quickly and provides certainty”.

The report says: “The cost of acquisition can be met from the council’s ‘strategic acquisitions fund’.

“The funds required for repairs could be met from the capital plan allocation for ‘Strategic Regeneration of Town Centres – Huddersfield’.

“The council has allocated £30m in the approved Capital Plan to support regeneration of Huddersfield town centre and there are currently enough uncommitted funds from this allocation to fund immediate repair and environmental works.

“Funding of more substantial repairs and any other works would be subject to negotiation with potential partners.”

The George Hotel is considered to be a “strategic” building within the so-called Huddersfield Blueprint.

The report goes on: “The hotel plays a vital role in regenerating this part of the town centre alongside the Station Warehouse, Estate Buildings and the Open Market.

“We need to find new uses for all of these buildings to  strengthen our town. Officers therefore consider that there is a strong case to acquire the property.

“A freehold purchase by the council would provide the opportunity for the council and its partners to invest in the property and take immediate action towards a long-term aim set out in the Blueprint.”

The council has applied for Heritage Action Zone (HAZ) status seeking £1m towards restoration of heritage buildings in St George’s Square including the George Hotel and the Estates Building on Station Road. 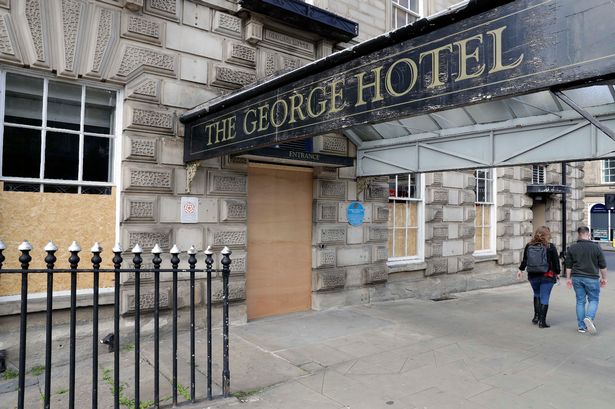 Neighbour’s shock after death of man found on Huddersfield doorstep