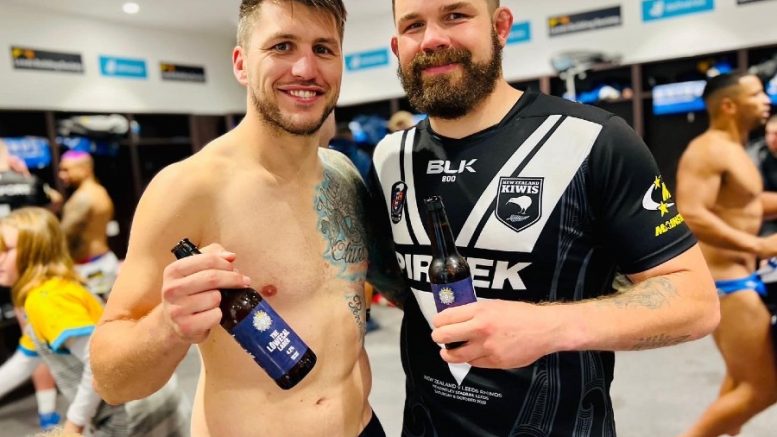 
‘The Löwecal’ is a premium session lager that packs an ABV% punch – but without the carbs. The lager was created by a Leeds-based team who believes in the power of balance and didn’t want a good time to come at the cost of good health.

I spoke to co-founder Adam Cuthbertson about The Löwecal and where it all started. If you recognise the name, Adam was part of the Leeds Rhinos team who bagged the Grand Final title in 2017 and the Challenge Cup at Wembley in 2020.

The Löwecal was developed and launched during the 2020 Rugby League Challenge Cup final. Since then, the team’s been on a journey to refine their product.

How is The Löwecal different?

The Löwecal was produced as a sessional lager that tastes good but has added benefits. It packs an ABV punch but without the high calories or carbs of other products on the market. The lager has a mid-range ABV% of 4.2%, one of the lowest calorie contents (88 cal/330ml or 151 per pint) and contains 0g of carbs. This is massive when you consider competitor drinks like Heineken containing over 10.5g of carbs per 330ml serving.

‘We are the only carb free beer in the UK.’

The team’s been keen to keep the nutritional profile good, but has done so without negatively impacting taste or quality. The Löwecal lager is lighter than traditional beers, with a cool, crisp, American taste – a flavour profile that rivals any other beer on the market.

Who is The Löwecal for?

The Löwecal was formulated with the social and session drinker in mind. Being lighter than most other beers on the market, it’s a drink that’s ideal for all occasions and is sure to appeal to a wide audience. Not only does it taste good but it also has added benefits.

‘We have considered the nutritional value of the product to help keep people in good health whilst also having a great time.’

The team produced The Löwecal for both the fridge and keg market. Those wanting to stock larger supplies can purchase 30 litre poly kegs with a universal UK Sankey coupler.

Where is the Leeds connection?

The Löwecal is Leeds through and through. The founding team is all Leeds based, with strong links to the Leeds Rhinos. The lager is locally produced with brewers, packaging designers and marketing teams all based in Leeds. Even the branding of The Löwecal takes inspiration from the blue and amber of Leeds sports teams. Moreover, the team’s keen to initially focus the product on the Leeds area, with customer feedback all being sought from Leeds residents.

Where did the idea for The Löwecal originate?

Adam, like most other guys in the UK, enjoyed drinking with the lads when he was playing rugby professionally. He told me that he would often enjoy 10 pints at a session, which were very costly in terms of calories and carbs, and as a result he would often skip meals to ensure that his hard work in the gym and out on the pitch wasn’t lost. But he was fed up with having to compromise. So he and the other founders developed a product that would save drinkers over 700+ calories per session. Adam explained that after switching to The Löwecal he would have calories to spend on food.

‘We have created a premium product that tastes great and won’t undo all of your hard work in the gym!’

So, what is next for The Löwecal? Adam explained that the team is working to increase the popularity of the brand and product across Leeds. At the moment, The Löwecal team is small and running on a small budget. But they’re passionate and they are doing everything they can to make the product as good as it can be.

‘We have made the product consistent in calories and carbs and we’ve worked to capture opinions. We’ve adapted to meet the needs and demands of the public.’

To raise awareness about The Löwecal, the team members have been knocking on doors and walking the streets. They have been working hard to get into local businesses, and whilst there are some local stockists, including Brewdog in Headingley, they are looking for more independents. The driven team wants to be competitive with the bigger brands and have their premium lager stocked in supermarkets as well as local independent retailers. But to do so, ‘we need to show that people are interested’, Adam explained.

In addition to ensuring The Löwecal is stocked more widely, the team is working to develop a range of drinks. Cider is currently being developed, with a new drink in the pipeline. To keep in line with their lager, the new drinks will not contain preservatives and will also be low in calories and carb-free.

To find out more about The Löwecal and where you can get a pint (or two) for yourself, check out their website: https://www.thelowcal.co.uk.

Peppa Pig enjoys her Best Day Ever at Leeds Playhouse

On the 27 October, Marshalls Mill will open its doors to the public for a free Halloween ghost hunting tour of Holbeck’s…

The City of Leeds has been honoured with a special reminder of the Queen’s legacy. The rowan sapling stood outside Buckingham Palace as part of the Tree of Trees sculpture to celebrate the Platinum Jubilee this year. It has now found a place in the peaceful gardens of the Sue Ryder Hospice in Headingley. The […] Leeds Living …

Leeds Creative Skills Festival, an exciting new festival of events, is set to showcase the array of opportunities available in the creative and cultural sector across the city. Leeds City Council News – News …

‘The Löwecal’ is a premium session lager that packs an ABV% punch – but without the carbs. The lager was created by a Leeds-based team who believes in the power of balance and didn’t want a good time to come at the cost of good health. I spoke to co-founder Adam Cuthbertson about The Löwecal […] Leeds Living …