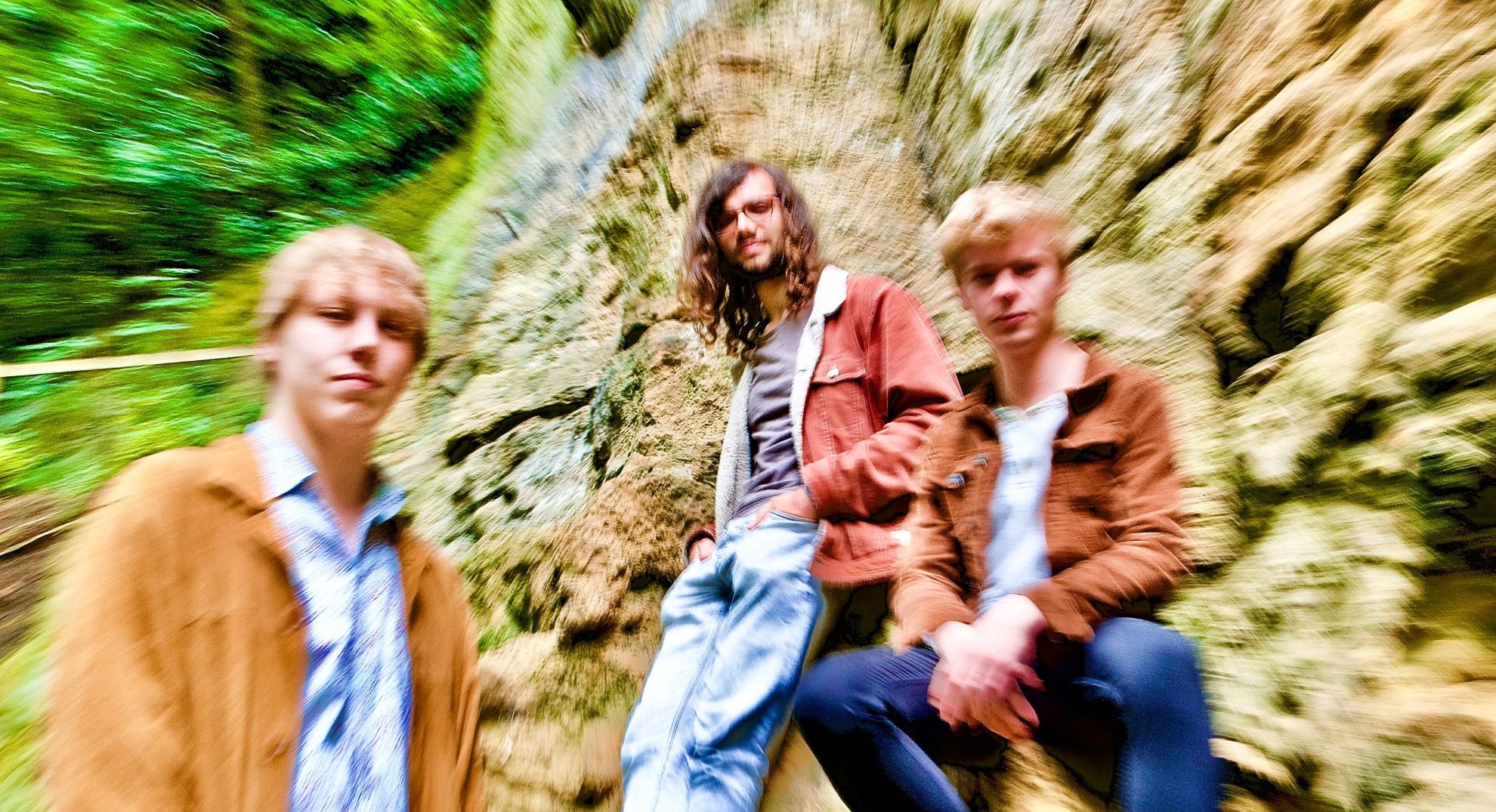 Tom Fuller (songwriter, vocals, rhythm guitar and sometimes keys) was good enough to answer a few questions just this week, so we can gain a better picture of the band’s history and their sound.

I asked Tom what led him into music.

“When I was a kid, the first time I really remember noticing music was listening to The Jam. They were my dad’s favourite band and I just really remember relating to the lyrics and the energy in the music. That sparked my love of writing more than anything. I remember being obsessed with That’s Entertainment and Town Called Malice, and thinking I wish I could write something like that. That started my journey into songwriting for sure.”

A man after my own heart there!  So how did The Calls came about?

“That’s a longer story than it should be! Me and Marcell started playing music together when we were about 13 or 14. I’ve known Will since we were 4 years old, but he never played an instrument until going to uni at 18, when I convinced him to learn guitar. Now he’s way better than I am! we ended up forming The Calls with the three of us and a drummer in 2015. The drummer left and we found ourselves still jamming and developing our sound, but playing with different drummers ever since. It sounds unsettled but it’s actually really settled. I think that flexibility suits us. We have a great setup now.”

This is really evident with ‘Fall Inside Again”, the commitment to their sound comes through – Tom’s vocals fill each track with that warm northern character we’re all quite proud of!  I asked where they spent most of their time rehearsing to achieve their sound and that sense of being settled.

“We practise in an old barn just outside Otley. It’s a really great creative space for us. We’re not near anyone else so we can make as much noise as we want, which is awesome! We meet up every week and always end up with a new song, so it’s a really productive environment for us.”

So rehearsing and creating gradually led to this latest EP. What about recording?

“We actually wrote these tracks quite a while back now. A Change Is Gonna Come Around Here is one we always played live pretty much since we formed the band, so that had been knocking around for a while, but we were waiting for the right time to record it. It had become a real fans’ favourite live. I think that’s turned out really well. Fall Inside is another fairly old one which went through a few versions before ending up in its current state, which I couldn’t be happier with.

The EP was recorded by our producer, Dan, who’s brilliant and who we always use for our recordings. We recorded it all in the barn rather than a studio, so there’s a real DIY vibe ingrained in the recording which I really like. I think in general there’s a distinct vibe that we managed to capture over the course of the tracks that’s really cool.”

So effectively many live gigs have led to fans’ favourites being recorded, which is somewhat of a thank you, and recorded in a way that definitely captures the vibe, as Tom says.  I asked what the inspiration was behind each of these tracks.

“We brought a wider range of influences in on this EP. We’ve been really getting into trip hop and dub, like Massive Attack and Portishead, which I think you can hear on Tell Me Why and A Change Is Gonna Come Around Here. On Change I was also trying to channel The Clash’s Guns Of Brixton, which is one of my favourites of theirs. Shoegaze is another influence that’s started to creep in a lot more, especially My Bloody Valentine and Slowdive, which I think you can really hear in Will’s guitars on I Should’ve Known and the outro of Fall Inside. Mix those in with our other classic influences such as The Stone Roses and The Libertines and I think you can start to see where we were going with the record.”

Yeah, all these elements from a very distinct group of artists can definitely be heard from this EP.  This kind of answered my next question with regard to artists who have inspired the band.

“Obviously there’s the ones I’ve already mentioned: The Jam, The Stone Roses, The Libertines. All the indie staples, The Smiths are a big one for me too, as well as Arctic Monkeys and The Beatles. They’re all the basis of my songwriting style; bands whose main strength is in their writing. But collectively we have this sonic palette which takes ideas from artists with a broader variety of sounds and styles. I mentioned Massive Attack and Portishead, but then we’re also big on a lot of Jamaican music: Bob Marley, King Tubby, Lee Perry are big influences for a lot of our delay styles and bass parts. Tame Impala are a huge one for the type of soundscapes we try to create, and Radiohead influence a huge amount of our music on just about every level. So there’s a broad mix. The best thing about it is that anytime one of us brings a new influence to the table, we always all dig it, without fail. There’s just this chemistry with our collective music taste.”

In amongst all this writing, playing live, recording, we’ve suddenly been hit by an unprecedented pandemic that’s damaged artists in particular, as well as the countless hard workers who actually make events happen.  I asked Tom how they’ve coped personally this year.

“It hasn’t been easy, but everyone’s in the same boat with that. I’ve actually still been working all throughout lockdown because I’m a delivery driver for Sainsbury’s, so I’ve had that to get me out of the house, which I’m really thankful for. The other guys in the band have just been stuck inside on furlough the whole time, so I’m glad I’ve had stuff to do. I get restless otherwise. I’ve still been writing loads so that hasn’t been affected at all. Earlier on in lockdown we recorded a few covers remotely which was good fun, and got a really good reception online, especially our cover of Breathe by Pink Floyd. I think we managed to do justice to that while still putting enough of our own spin on it. We did a couple of covers and then my interface and hard drive both died so that stopped us in our tracks. Good fun while it lasted though!

We’ve also been working on our upcoming releases for next year so there’s that for you guys to look forward to!”

Tom is upbeat. He formed a band who are very resolute and sincere in their efforts.  It’s paying off, their sound is nostalgic and it’s definitely ‘Northern Psych’.  His positive tone at this time is well needed too and quite refreshing to be fair!  So cheers Tom for your time – it’ll be so good to see The Calls when local live gigs are on again.

You may have seen how some artists have produced lockdown videos online, where they’re in isolation?  End result being a grid video of them all playing live?  Well take some time out to watch The Calls covering ‘Breathe’ by Pink Floyd, it has come out so good and it’s here.

A lot of The Calls sound reminds me of many a noughties Cockpit gig, where all you can remember from the night (if anything) are swathes of lush phased guitar sound getting thrown around your head, as you stare down at a vast periphery of flared jeans and DC shoes; mmmm….fashion.  But the music definitely lives on.

Finding out Tom’s first ever album purchase was Primal Scream’s Screamadelica makes me feel incredibly old!  Anyway, you get the picture that these guys are pushing the indie scene quite wonderfully.

This EP is quite eclectic, covering a lot of moods as you hear it through.  The opening track ‘Fall Inside’ launches into a punching staccato riff and a beat that took me straight back to Kevin Carter by the Manics.  Then Tom’s indifferent regional accent kicks in, bringing up memories of Mark E Smith…kind of mixed with Kasabian’s Tom Meighan in style – that same lazy yet captivating delivery.  It all comes together really melodically and relaxing, but with a punch that keeps you interested.  The guitars plate-reverb phasing on the chorus really makes this track flash bright too.  I’ve played this song a few times now and it’s really growing on me!

‘Tell Me Why’ leads with a really soothing bass, offbeat rimshots for a few bars, all leading to a beautiful guitar riff that really catches you.  Then Tom’s vocals chorus into a warm, nostalgic nod to Tim Burgess.  I love how this track traces between the joyous and the longing.

Acoustic guitar with tabla takes you quite peacefully into ‘I Just Thought I’d Say’, definitely one of those reflecting on the madness in the world tracks.  Hypnotic vocals repeat the same hook throughout which really works, giving you a few minutes of drifting through pleasant memories musically, yet the lyrics are a bittersweet whistleblow on the suffering we see.

‘I Should’ve Known’ really does indulge that early noughties sound of strumming through heavily phased reverb.  It catches you with ist melodic charm throughout. It triggers that reminder of so many songs all at once.

Quickly dialled atmospheric delay feedback introduces and mingles throughout  ‘A Change Is Gonna Come Around Here’.  This is my favourite; it’s gooood!  It takes me back to seeing the incredible Cooper Temple Clause at The Met sometime in 2003.  With its dark feel, reminiscent of when they played ‘The Lake’ – that song is out of this world live.  The outro on the closure of this EP really does take me back to that awesome gig. You know a song is good if it triggers awesome gig memories!  Tom said that this is one of the fans’ favourites in their live set and rightly so – it’s shaken my lounge a few times this week!

So, I’m eager to see The Calls perform live, a local band definitely showing strength in triggering nostalgia of many a gig crawl around Leeds fifteen-twenty years ago.  When gigs are legal again we can all go see them can’t we?!

Leeds trio THE CALLS release their FALL INSIDE AGAIN EP on 20 November on Atomic Records, a record that combines their three most recent singles: A Change Is Gonna Come Around Here, Fall Inside and I Just Thought I’d Say, with two previously unreleased songs, Tell Me Why and I Should’ve Known. The EP will be available on CD via Bandcamp and through all digital platforms including Spotify, Apple and Tidal.

Watch the videos for the three singles:

A Change Is Gonna Come: https://www.youtube.com/watch?v=G-TIfPv9Xo4

In conversation with Stella Serpente of MadeOnceCreations

Hijab and Red Lipstick, Yousra Imran’s debut novel, won the Hashtag Publishing prize in 2020. Yousra is half-English and half-Egyptian. She grew up in London and moved to the Arabian Peninsula when she was fifteen. Her book focuses upon the culture shock she experienced on moving to a more restrictive society where her father had […] Leeds Living …

Leeds has a great history of fish and chips. There have been fish and chip shops in Leeds since the 1860s. The city is home to the NFFF ( National Federation of Fish Friers) and until recently boasted the oldest fish and chip shop in the world, in Yeadon. The foundations of the Skyliner in […] Leeds Living …