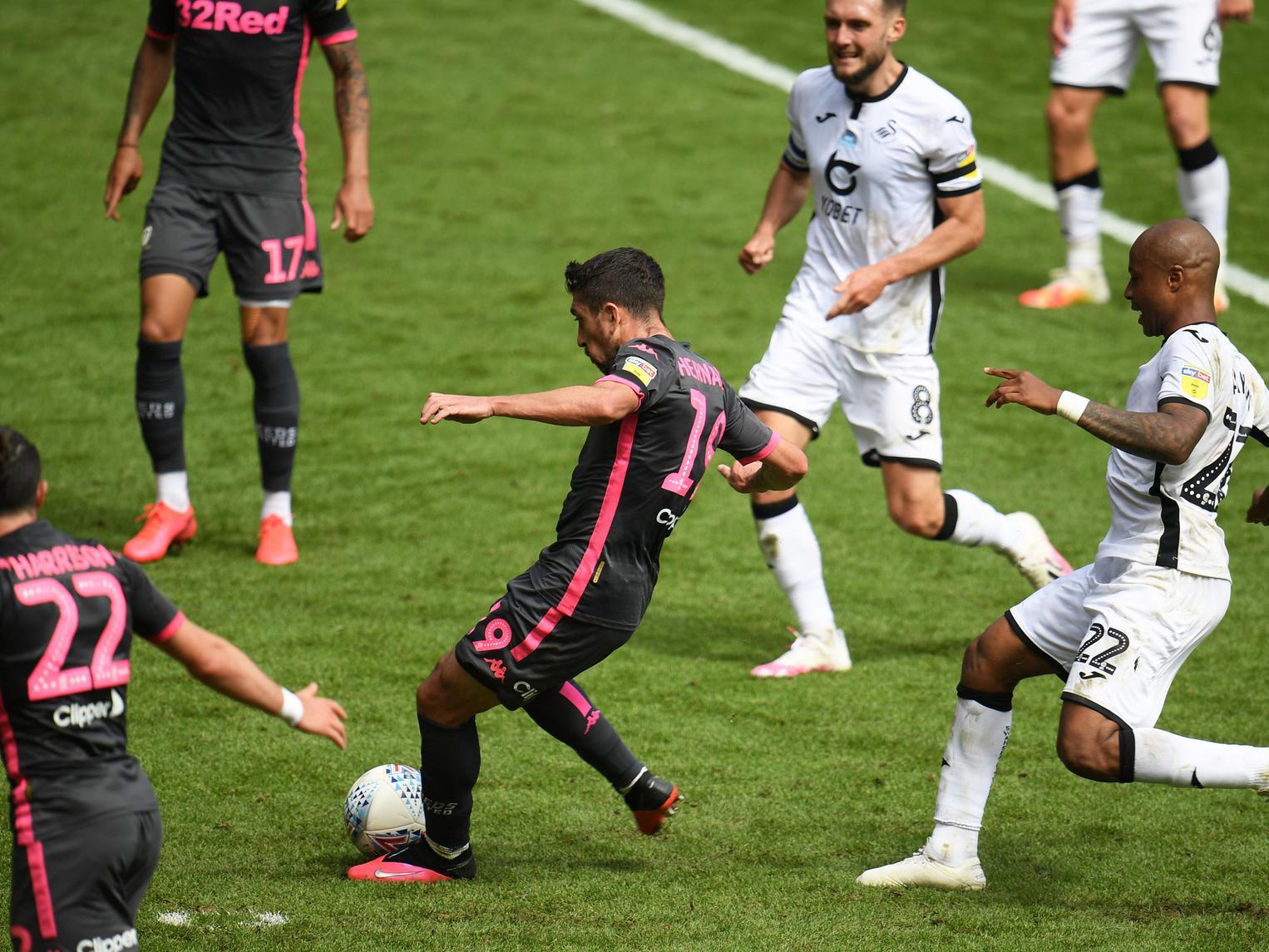 United’s odds for automatic promotion had already been cut to 1-20 ahead of Sunday’s contest in South Wales after second-placed West Brom had dropped points in Saturday’s 1-1 draw at Blackburn Rovers.

It means that even if the Baggies and Bees both take nine points from their final three fixtures, four more points would guarantee Leeds automatic promotion.

PRICELESS: Pablo Hernandez nets an 89th-minute winner at Swansea City that has left Leeds United 1-50 for a top-two finish and with possibilities of being promoted on Thursday night. Photo by Harry Trump/Getty Images.

With home clashes against the Championship’s bottom side Barnsley and fourth-bottom Charlton Athletic sandwiching a trip to tenth-placed Derby County, United are now no bigger than 1-50 for a top-two finish and as short as 1-100 with some firms.

West Brom have now drifted out to 4-11 for a top-two finish with a Brentford side who have won seven games in a row down to 9-4.

Fourth-placed Fulham are another two points behind Brentford and not yet mathematically out of the equation but Scott Parker’s side can be backed at 33-1 for a top-two finish.

Fulham visit West Brom in a huge game on Tuesday at 5pm with the Baggies then facing a Friday evening trip to fifth-bottom Huddersfield Town and finishing off with a home clash against 15th-placed QPR.

Brentford host eighth-placed Preston North End at 5pm on Wednesday before Saturday’s 12.30pm kick-off at 17th-placed Stoke City and the Bees finish off at home to Barnsley on the final day of the regular season next Wednesday with all games kicking off at 7.30pm.

Fulham, meanwhile, will follow their clash at West Brom with a 3pm Saturday kick-off at home to 14th-placed Sheffield Wednesday before concluding matters at 15th-placed Wigan Athletic.

With Leeds not hosting Barnsley until 5pm on Thursday and the clash at Derby now taking place at 2pm next Sunday, it means United will once again play last of the automatic promotion contenders in the next two rounds of games.

But given the daylight back to second and more importantly third, Leeds are now strongly fancied to go up as champions with United a best-priced 1-7 to win the division.

West Brom are 6-1 with Brentford 40s and Fulham 500s and if results go their way United could even be promoted on Thursday night with Brentford now forced to beat Preston to prevent Leeds being handed a chance to seal a return to the Premier League in just four days’ time.

If Brentford draw or lose and United beat Barnsley then that’s it and the Whites are up.