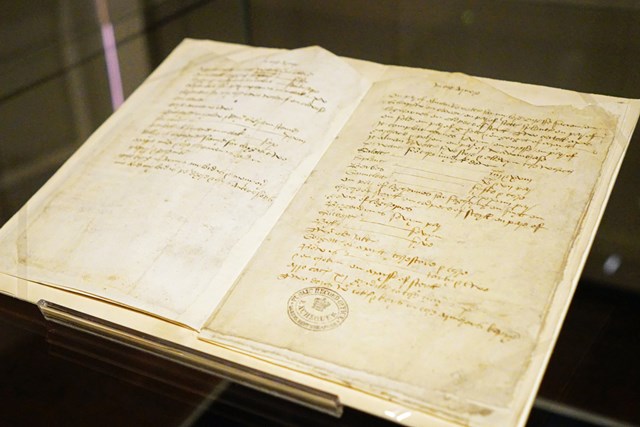 A 500-year-old checklist detailing the complete contents of Temple Newsam House when it was first built has gone on display in an exhibition exploring centuries of life above and below stairs.

Compiled for Thomas, Lord Darcy, thought to be the house’s first official resident, the fascinating inventory would have served as comprehensive stocktake of his palatial new home back in the early 16th Century.

Remarkably well-preserved, the document is one of the key exhibits in Below the Salt, a thought-provoking exhibition by artist Catherine Bertola examining the theme of social status as the site marks its 500th anniversary this year.

On loan from the National Archives, the inventory includes exhaustive detail about the house’s rooms, such as a brew house and bakery, as well as its extensive collection of religious paraphernalia, which is helpfully listed under the heading ‘chapel stuff.’

More surprisingly, it also sets out Temple Newsam’s once impressive stockpile of arms and armour, which would have been used by men at arms called upon by the King when needed for war or to maintain order in the local area.

Once a noted military campaigner and political strategist, in later life Thomas, Lord Darcy was branded a treasonous subversive for his part in a northern rebellion against the crown’s move to establish the new Church of England.

As a consequence, he fell victim of the notorious wrath of Henry VIII and was beheaded in London in 1537, with his property, including Temple Newsam, seized by the crown.

His inventory survived amid the archives, and a modern English transcription has been recorded by Catherine Bertola for the exhibition, read by members of the current staff.

A series of art works, including sculpture, photography and film, have also been located around the house, exploring the contrast between the lives of aristocrats and those who worked behind-the-scenes to keep the house moving.

Catherine said: “Temple Newsam is an enthralling place filled with thousands of different stories which can be found in every room and object.

“Working with the team at the house and volunteers, Below the Salt looks to uncover some of those stories by reinterpreting the building’s unique architecture and collections, and the parts played by the many generations of residents.

“Thanks to this incredible if not rather humble inventory, we have a direct insight into Temple Newsam House and the people who occupied it back when it was first built centuries ago, which provided the starting point for this exhibition.”

Earlier this year, Below the Salt also saw Catherine create a series of stunning salt patterns in the house’s Great Hall which took inspiration from the beautiful design of an early piece of woven table linen. Salt was considered a status symbol in the days when Temple Newsam was home to some of the country’s most prominent of aristocratic dynasties.

The completed artworks were then photographed before the resulting images were developed using a traditional salt and silver technique that can be seen in the exhibition.

Councillor Elizabeth Nash, the council’s lead member for museums said: “Our wonderful museums and galleries are a cornerstone of our city’s cultural offering and we know how much people in Leeds have missed being able to visit them.

“We’re thrilled that all our sites are now ready to welcome back the public and that visitors can safely enjoy our museums and galleries both in person and online.”

Each Leeds Museums and Galleries site has social distancing and hygiene measures in place and booking in advance at some sites is essential. Booking ahead is advised for visits to Temple Newsam. New visitor routes are also in place and some venues have limited access to some areas ensure visitor safety. 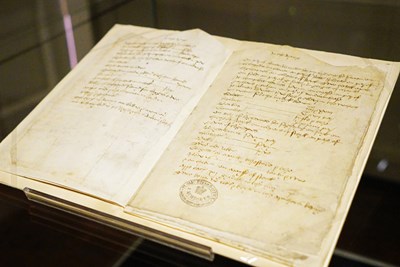 Leeds businesses rally round to feed families during half-term