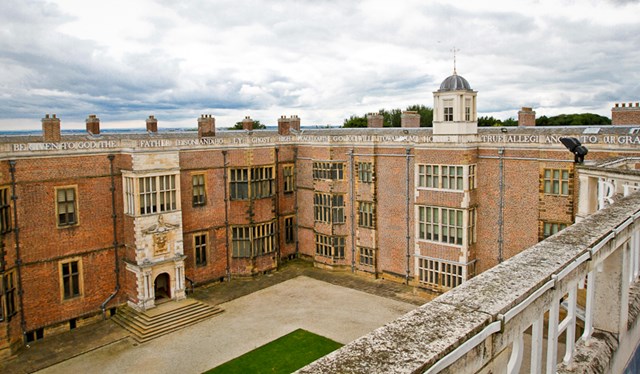 Thought to be the wordiest architectural addition of its kind anywhere in Britain, the lengthy statement still spans the rooftop today and is one of the mansion’s most recognisable features.

So when staff at the house decided the mammoth motto needed a lick of paint, they wanted to get an up close look to make sure the work was carried out to the letter.

The recently-completed refurbishments at the 500 year-old Tudor Jacobean mansion have included repainting all of 197 letters, which command spectacular views of the surrounding estate.

First installed in stone in 1628 under the watchful eye of Sir Arthur and later replaced with metal, the lofty lettering reads: “All glory and praise be given to God, the father, the son and the holy ghost on high peace on earth good will towards men honour and true allegiance to our gracious king loving affection amongst his subjects health and plenty be within this house.”

Believed to be the longest on the exterior of any house in the country, the lettering was one of a string of improvements carried out by Sir Arthur, who is credited with modernising and transforming the mansion after he purchased it in 1622.

Sir Arthur’s colourful career as a landowner, politician and chemicals magnate saw him sit in the House of Commons whilst also becoming renowned for both his financial acumen and his ruthlessness in business.

Adam Toole, curator at Temple Newsam, said: “When Sir Arthur took over Temple Newsam, the house was somewhat neglected and in need of quite major repairs. Over the next 12 years, he commissioned a series of large scale improvement projects which completely transformed and revitalised the house, including changing it from a four sided courtyard to the u-shaped configuration we see today.

“Sir Arthur’s ruthless business dealings meant he didn’t enjoy the best reputation among his peers, so owning a house like Temple Newsam would have been a huge status symbol and Sir Arthur would have wanted the mansion’s appearance to reflect his standing.

“Likewise, having such a lengthy and forceful motto installed on top of the building would also have been a powerful statement to the world about the new owner’s piety and loyalty to king and country.”

Visitors will be able to learn more about life at Temple Newsam House in an upcoming exhibition entitled Below the Salt, which opens on September 12.

New works by artist Catherine Bertola, inspired by the different aspects of Temple Newsam’s history and collections, will explore how the house has been occupied by people and objects over the centuries.

Councillor Judith Blake, leader of Leeds City Council said: “Our wonderful museums and galleries are a cornerstone of our city’s cultural offering and we know how much people in Leeds have missed being able to pay them a visit.

“We’re thrilled that all our sites are now ready to welcome back the public and that visitors can safely enjoy our museums and galleries both in person and online.”

Each Leeds Museums and Galleries site has social distancing and hygiene measures in place and booking in advance at some sites is essential. Booking ahead is advised for visits to Temple Newsam. New visitor routes are also in place and some venues have limited access to some areas ensure visitor safety. 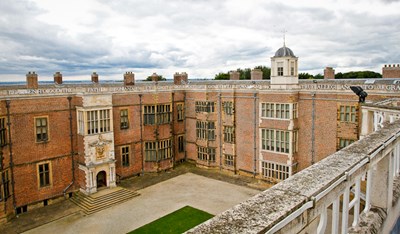 Leaders rally together to help build a better tomorrow