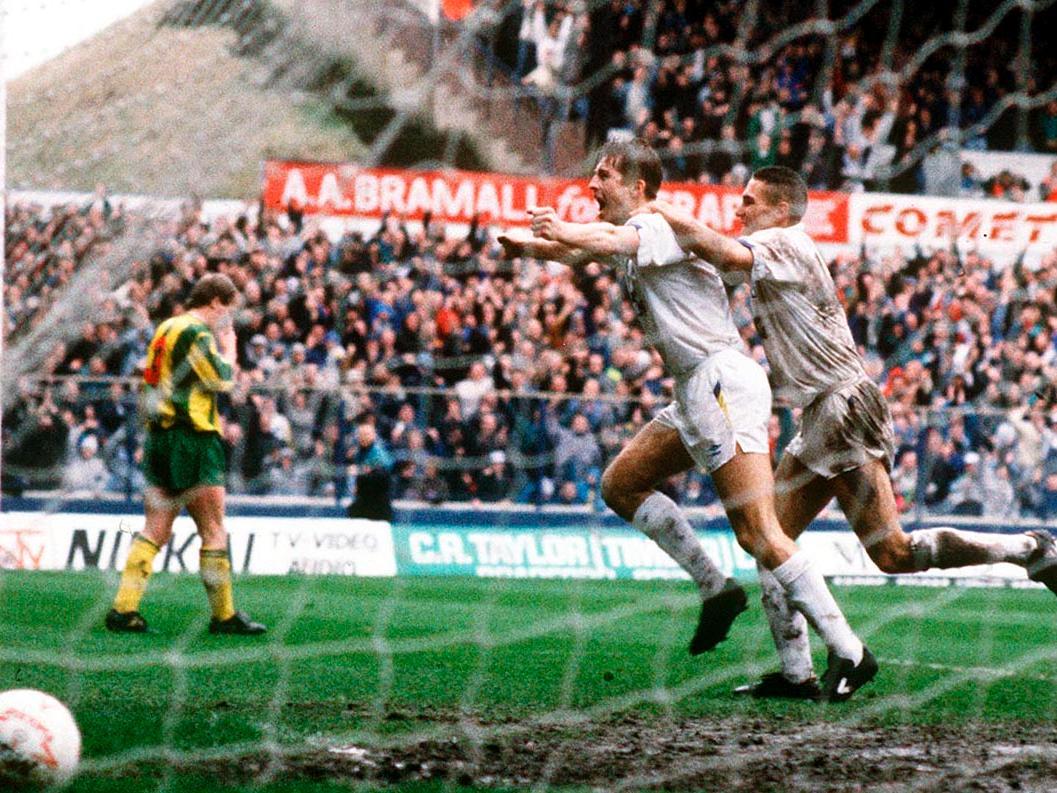 Lee Chapman knew how to find the back of the net – scoring 80 goals in 171 appearances for Leeds United during this three seasons with the club.

He quickly became the goal machine that the Whites needed when he was brought to Elland Road by Howard Wilkinson in January 1990. He scored on his debut – at Ewood Park in a 2-1 win against Blackburn Rovers – just two days after signing and so began his rich association with the Whites.

His haul of 12 goals in 21 matches during the second half of the 1989/90 season helped get Leeds over the line and return to the top-flight after an eight-year absence.

Chapman’s goals helped fire Leeds United to the First Division title in 1991/92. He scored 16 goals in 38 games including two hat-tricks against Sheffield Wednesday and Wimbledon as well as away goals against the rest of the top four.

When he scored in a live match against Arsenal at Highbury during the business end of the season, ITV commentator Alan Parry described him as “the supreme goalscorer”.

Your YEP has been asking the Elland Road faithful to share their memories of a striker, not necessarily easy on the eye, who would put his body on the line for the cause and scored when it mattered.

Paul Firth – “He was a solid player. Lost count of the amount of times he ended up with blood on his face after putting his head among feet to score a header. Part of a brilliant team.”

Mcrobbie Andrew – “Would dive in front of a bus if he had sniff of goal.”

Wiggy Hawkins – “Stuck his head where others fear to tread. Legend Chappers!”

Dennis Randall – “A very underrated old fashioned centre forward with an eye for a goal.”

Billy Hick – “Saw his debut away Blackburn, just loved him as a player. Great in the air and scored great goals.”

Jason Dunne – “I was in the Leeds end at Blackburn also. Came home, rang my dad and told him we are going up. Sometimes, your team makes a signing that makes all the difference.”

Greg Wright – “Like watching Bambi on ice but could score goals.”

Martin Land – “Bournemouth away Chris Kamara down the right perfect ball for Chapman into the back of the net to win the league for the mighty Whites.”

Dave Bell – “One of the best headers of the ball ever.”

Alan Mannion – “Stuck his head in where it was dangerous.”

John Martin – “Goal machine. One of if not the most important signing of the Wilkinson era (alongside Strachan).”

Kevin Pickard “I was lucky enough to be sitting in the stand at Bournemouth with my young lads when Chappie headed the winner that took us up. The YEP printed a tremendous photo of the ball as it almost wrapped itself around his head, it was hit with such power. I still have that clipping. I have supported Leeds well over 50 years and it was one of my greatest memories.”

Joe Hardcastle – “Underrated. He’s the 19 highest top scorer ever in England top flight yet didn’t even get an England cap.”

James Amos -“Not the quickest by any means which makes him even better as Lineker and strikers in that era had their speed so he had to use his football brain to get in positions.”

Jim Ashman – “I remember when Leeds won a corner he would find the opponents centre half and stand next to him. He knew he could out header them and scored plenty of goals. Great player.”

David Wilford – “His goals got us up and won us the title, gave everything and reaped the rewards. Remember his injury at Spurs on the ash track, played just a few days later.”

Barry Conolly – “If you stuck ball on his head you knew that it had 90 per cent chance of hitting net.”

Leeds has a fantastic story to tell – and the Yorkshire Evening Post has been rooted firmly at the heart of telling the stories of our city since 1890. We believe in ourselves and hope you believe in us too. We need your support to help ensure we can continue to be at the heart of life in Leeds.