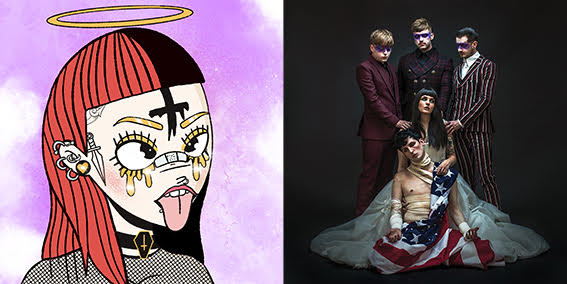 The pop-up, The Haunt, is to celebrate UK rock-band Creepers tour and guests can expect an exciting collaboration between Creeper, Goth Girlfriends (NFTs) and Old Sarum Tattoo among others.

The Haunt will be travelling the country alongside the Creeper tour, from December 15th – December 21st – locations include London, Brighton, Glasgow, Manchester and Leeds. The pop-up will include opportunities to get inked from custom flash sheets by the team at Old Sarum Tattoo, free cosplay makeup from Charlotte Clutterbuck (perfect for those heading to the gig itself!) and an NFT showcase from Goth GFs, giveaways and exclusive merch. The pop-ups will all open at 12 noon.

Goth GFs will also be giving away 10 gig tickets at each pop-up to NFT holders. Goth GFs will be accompanying Creeper on each leg of the tour, showcasing incredible art and speaking about all things alternative culture in the metaverse, and the awe-inspiring community that they are creating.

Creeper, formed in 2014 are an English goth-horror-rock band, originating in Southampton. Signed with Roadrunner Records, they have released 3 studio albums, with the most recent, American Noir released in July 2021.