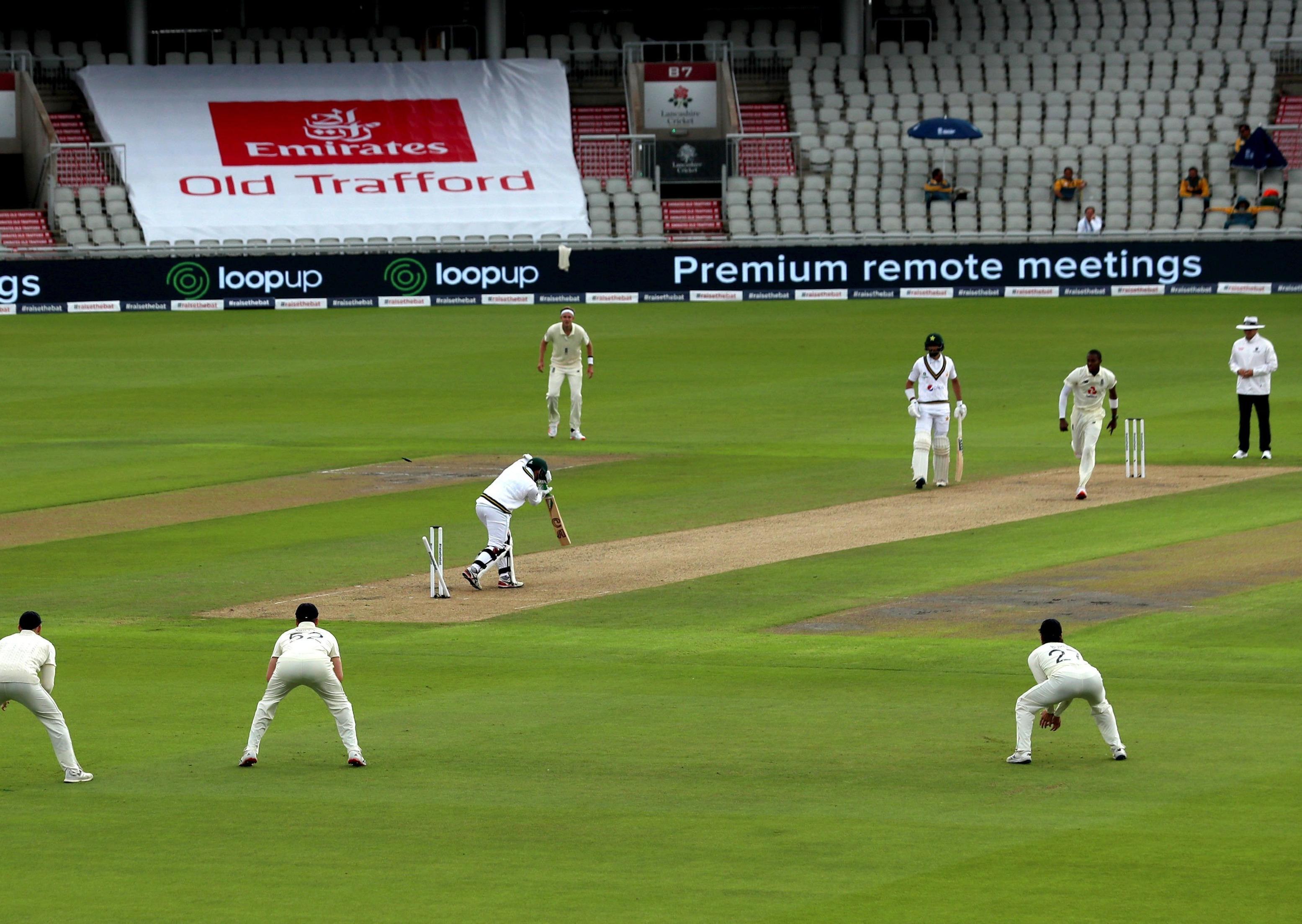 GOT HIM! Pakistan’s Abid Ali is bowled by England’s Jofra Archer, far right, during day one of the Test match at Old Trafford. Picture: Lee Smith/NMC Pool/PA

Already an established white-ball star, Babar arrived in England boasting a fast-growing reputation in the longer format, averaging 65.5 since the start of 2018 including four centuries in his last seven innings.

That is well clear of both Steve Smith and Virat Kohli – the top two red ball batsmen in the world – and his effortless 69 not out showed his credentials in full as he guided the tourists to 139-2 at Emirates Old Trafford.

His knock was easily the highlight of a first day comprising just 49 overs, with 11 boundaries of the highest order in a stay of exactly 100 balls.

Pakistan’s Shan Masood drives through the covers on day one of the Test match against England at Old Trafford. Picture: Dan Mullan/NMC Pool/PA

Chris Woakes, England’s best performer with a wonderfully controlled eight-over morning burst, might have dismissed Babar first ball with a beauty that threatened both the outside edge and the off stump but that near miss was as good as it got against the 25-year-old.

As well as frustrating England’s attack, Babar also left his partner Shan Masood playing second fiddle. The opener batted studiously for 45no, with Jos Buttler fluffing two chances off Dom Bess on that score – shelling a catch and missing a stumping.

England’s team selection hinged predominantly on Ben Stokes’s nagging quad injury, and, although he went through an extended bowling practice during the warm-ups, he was ultimately named as a specialist batsman.

While that spelled bad news for Zak Crawley, omitted once more in an unchanged XI, it at least spared a thorny selection decision between Woakes and James Anderson.

CLASS ACT: Pakistan’s Babar Azam drives through the covers on day one of at Old Trafford. Picture: Dan Mullan/NMC Pool/PA

Joe Root was insistent he too would have batted and, though the moody skies and ever-present floodlights gave his bowlers some cause for optimism, Masood and Abid Ali showed plenty of composure to negotiate the first hour for the addition of 32.

Neither man was flawless but stuck admirably to the task of seeing off the initial bout of Anderson and Stuart Broad. While they drew a blank it took Archer all of seven balls to make ihs presence known, forcing Abid back in his crease then flattening his off stump with a fuller ball that seamed in off the surface.

He made his way back for 16, an exit made all the more frustrating by a brief rain shower which saw the rest of the players follow after just three more deliveries.

After a brief recess Woakes sent Azhar Ali for a more permanent trip to the pavilion.

Looking to get off the mark with a flick to leg he was undone by Woakes’s unflinching control of line and length, thumped on the front pad and needlessly burning a review on his way.

Babar arrived shouldering great expectations, but Woakes’s greeting was perfect, shaping in and snaking away to leave the batsman groping.

It took him 15 balls to get off the mark, dropping a hasty single to cover, as Woakes stitched together a fine spell of 8-2-14-1.

The atmosphere shifted after lunch at Babar’s prompting, with 68 runs flowing in 16.1 overs before the rain settled back in for almost three hours.

Babar took on Anderson first, flicking him to fine leg, pushing through mid-wicket and forcing elegantly between point and cover to get the boundary tally moving.

England’s record wicket-taker, who turned 38 last week, also became the first man in Test cricket to be no-balled by the TV umpire as part of a new ICC trial.

Babar was into his stride now, stroking a Broad full toss to the ropes, caressing Archer past mid-on and unfurling a pair of serene cover drives off Bess. England had been expecting the very best from the one-time Somerset recruit and he was delivering just that.

Bess had better luck against Masood, deceiving him with an arm ball then clipping his outside edge on 45.

Buttler shelled the chance to deny England a breakthrough before the rain, but Babar reached his half-century just in time with another four off Archer.

When play belatedly resumed at 5.45pm a couple of short balls from Archer in failing light were enough to make it an all-spin affair, Root joining Bess from the Brian Statham End.

Bess bested Masood for the second time when he came down the wicket and made no contact, Buttler undone by the bounce as he allowed a stumping chance to go begging.

There was just time for one more healthy swing of Babar’s bat, pounding Bess down the ground before bad light ended things.

Editor’s note: First and foremost – and rarely have I written down these words with more sincerity – I hope this finds you well.

Almost certainly you are here because you value the quality and the integrity of the journalism produced by The Yorkshire Post’s journalists – almost all of which live alongside you in Yorkshire, spending the wages they earn with Yorkshire businesses – who last year took this title to the industry watchdog’s Most Trusted Newspaper in Britain accolade.

And that is why I must make an urgent request of you: as advertising revenue declines, your support becomes evermore crucial to the maintenance of the journalistic standards expected of The Yorkshire Post. If you can, safely, please buy a paper or take up a subscription. We want to continue to make you proud of Yorkshire’s National Newspaper but we are going to need your help.

Postal subscription copies can be ordered by calling 0330 4030066 or by emailing subscriptions@jpimedia.co.uk. Vouchers, to be exchanged at retail sales outlets – our newsagents need you, too – can be subscribed to by contacting subscriptions on 0330 1235950 or by visiting www.localsubsplus.co.uk where you should select The Yorkshire Post from the list of titles available.

If you want to help right now, download our tablet app from the App / Play Stores. Every contribution you make helps to provide this county with the best regional journalism in the country.