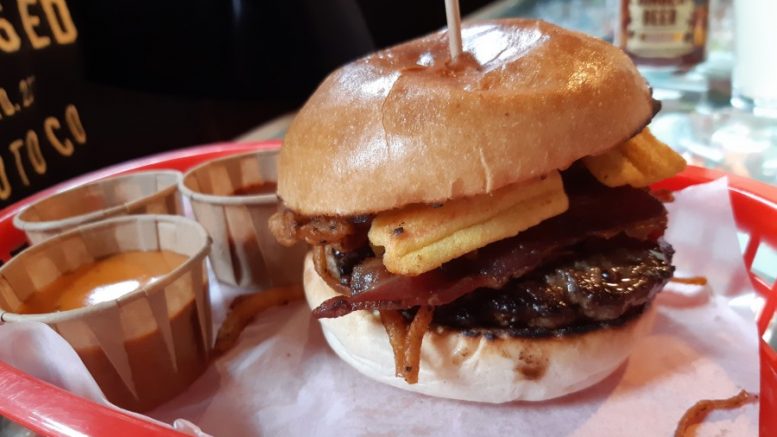 
Almost Famous – an all-American eatery in the heart of Leeds

Almost Famous is an all-American burger and fries restaurant with branches in Leeds, Liverpool, and Manchester. The restaurant was launched because the founders wanted to create somewhere for people to enjoy ‘super juicy dripping down your arms no nonsense burgers’ made from prime cuts of beef, quality bread buns, lots of melted cheese and creamy, tangy sauces.

The Leeds restaurant is hidden behind big wooden doors on Great George St in the City Centre, just off Millennium Square. I’ve walked past those doors so many times, so this week, after an afternoon of shopping and bike riding, and an evening with no plans, my boyfriend and I decided to head inside. It was a good decision, not only because it smelled great, but also, it was threatening to rain.

We walked into the restaurant and, in addition to a friendly welcome by the staff, we were greeted by full-on American décor, with pop art, big images of all-American favourites like pop tarts, and comic book pop-outs. Even the tables were American-esque, with sweets hidden under glass. It was all pretty cool and certainly got us in the mood for proper American food.

Although we arrived pretty early for dinner, there were already a few tables occupied by people sipping on milkshakes and munching on fries, which was good to see. Thankfully, it wasn’t too busy, so we were able to sit in a large booth, where we also had room to put our bikes and our bags.

We ordered some drinks – ginger beer and water – although the shakes did sound incredible. Whilst we were sipping on our drinks to rehydrate, we had a look over the menu, and caught a waft from someone’s burger. It smelled incredible – sweet, meaty and delicious. And after that, we knew we were in for a treat. The menu had a good number of options, without being overwhelming. There were burgers, some of which were heavily loaded with cheese, sauces and extra meats, as well as a selection of fried chicken options and lots of vegan/ veggie options too.

We opted for the ‘Phoenix’ burger, priced at £11.50. The burger included a double beef patty with cheese, crispy bacon, shoestring fried onions, bacon frazzles crisps, and sliced red chillies. The burger was finished with a trio of sauces, including redneck BBQ, bacon bacon mayo and bacon ketchup.

The burger itself wasn’t huge, but it was well packed. The burger patties were juicy and the combination of flavours inside was pretty epic. The only things that we would have changed would have been to remove the chillies as we felt they were unnecessary – there was enough flavour without them – and to add in some more frazzles as they added a great bit of crunch, but as it was, they were lost in the meaty stack.

We also ordered a bowl of ‘BLASTS’ AKA boneless buttermilk fried chicken pieces which were tossed in a sticky pho-king teriyaki sauce and were served with a creamy blue cheese. The chicken was super moist and the teriyaki sauce was sweet, sticky and delicious. I loved the creamy blue cheese dip as it helped to freshen up the chicken, and also added a really nice cheesy hit.

As a side, we shared a bowl of ‘winning fries’, priced at £4. The fries were a mix of skin-on ‘normal’ fries and sweet potato fries. I loved the fries – they were crispy and there was just the right quantity. They went really well with the rest of the meal and worked brilliantly with all the dips.

Overall, the food was some of the best American food that we’ve had outside of America. Everything tasted amazing, and we managed to clear all our plates. I would have liked to have had some fresh veggies like cucumber or celery to go with the food, as it would have contrasted with the rich, meaty flavours. But I realise I may be odd with that request, and still really enjoyed the meal without them. I’d certainly head back to Almost Famous and would happily order everything again. If you’re on the lookout for a good burger joint, I’d recommend giving Almost Famous a shot.

A Slice of Home

Salvatore’s has just opened in Headingley, 4 doors down from Salvo’s and taking over the premises previously occupied by Salumeria. The new third-generation family run bar will serve a wide range of drinks and selection of authentic Italian inspired street food, run by Chef Patron Salvatore Dammone the late Salvo’s grandson. Salvatore will continue the […] Leeds Living …

Kirkgate Market is becoming a destination for foodies. On heading to the food court, shoppers might notice a new business selling slices of pizza, or people eating great value oysters at the long established Hayes Seafood. Wander a bit further, around aisles of clothes, greengrocers and furniture, and you may be lucky enough to discover […] Leeds Living …