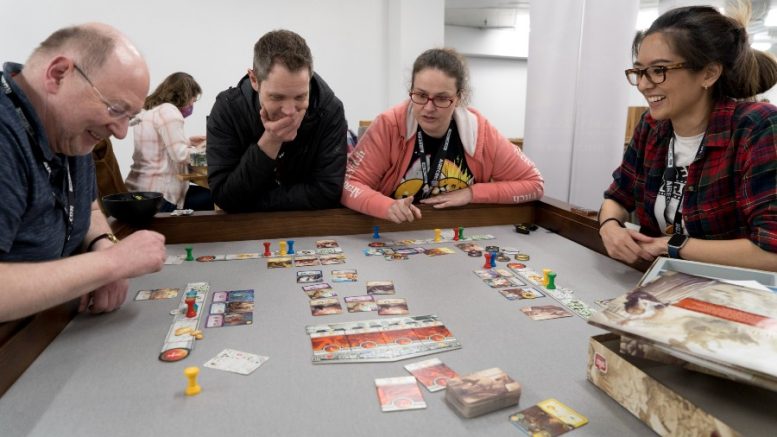 
One of the UK’s largest analogue gaming festivals is bigger than ever in 2023. AireCon, born in Leeds and based in Harrogate, has been extended by one day, and is taking more floor space at Harrogate Convention Centre to increase capacity for over 80 exhibitors for over 40 hours of gaming.

The online G.A.M.E System will keep you updated and in the Gameseekers Area, a dedicated Game Guru will be on hand to help solo attendees find like minded people to game with.

Director Mark Cooke originally set up AireCon in his flat so that he and his friends could play games for a weekend. This was before he teamed up with Ben Clarkson. After a couple of public events in Bradford, it became clear there was already a need to expand.

Software engineer Rick Meeson and Nabil Homsi, Director of the Leeds-based Travelling Man chain of comic and board game shops were brought onto the team. Then a long search led Mark and co. to The Harrogate Convention Centre, their home since 2017 and a platform that has allowed AireCon to become one of the largest and most popular events of its kind across the country.

Community at its Heart

AireCon 2023 will offer more table space than ever before so attendees can meet and game as they please outside of the exhibition space. The beloved Bring ‘n’ Buy area is back to help visitors complete their collections alongside a whole host of tournaments, events, RPGs and a carefully curated selection of the finest street food trucks from across Yorkshire on hand to keep everyone fed and watered.

For anyone new to analogue gaming or wanting to experience tabletop gaming for the first time, Leeds-based board game chain Travelling Man will be back with over 700 games for attendees to borrow for free and play over the convention.

Elsewhere on site, fans young and old will be more than welcome in the Family Zone for gaming sessions, tabletop introductions and game demonstrations all run by  Imagination Gaming and catered to kids of all ages. 2023 will also see the welcome return of the renowned AireCon Inter-School Tournament in which Imagination Gaming invites teams from local schools to compete for gaming glory in an exciting variety of tabletop titles.

Tickets for AireCon 2023 are available now and can be purchased here.

“We’re so excited to be returning to Harrogate for our biggest event ever in 2023. We’ve increased the physical size of the convention with more exhibitors, more halls and more gaming space! AireCon 2023 is going to be the best yet, with so much for people to do whether they’re attending in groups or coming solo.”

More information and tickets can be found here

In Conversation With Brindley Sherratt